Wondering to aerate or verticut / overseed? You’re in the right place. 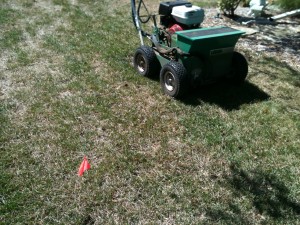 If the Summer looks to have taken its toll your lawn, you’re probably wondering what steps to take to get it back in shape. In the post below, we provide information on the differences between the different methods of lawn restoration. Continue reading below to clarify these actions by: how they are done, why they are done and what do they cost.

Aerating is probably the most popular with people term-wise. It seems that everyone we talk to wants to “aerate”. The funny thing is that the more we talk the more we discover that they aren’t real sure why they want to aerate and that might just be what they have heard to do. So, let’s put some identity to the action.

More than likely we have all seen a lawn or golf course that has been aerated. I like to say that it looks a lot like a yard that has been pooped on by a bazillion little dogs. Well, that’s not what actually happened. Aerating is actually a shortened term for Core Aeration. In the Civil Engineering world we would refer to them as “samples”.

But anyway, aerating is done by a machine that has several tubes attached to a drum. These tubes dig into the ground, by the weight of the machine, about 2-3 inches as the machine moves forward. The hollow centers of the tubes collects your soil, grass and thatch leaving a hole in the ground while pushing out the soil from the previous rotation and hole.

The reason that aerating is done to a lawn is to decrease the compaction of the soils. By pulling out a “core” and leaving a hole and depositing its contents at the surface, the soils have room to expand and thus decrease compaction. Decreasing compaction allows for your grass roots to expand freely. It is also important to note that thatch is brought out with each core made. You want thatch gone, because while in place, it intercepts the delivery of water, fertilizer and other nutrients to you soils and grass roots.

We have seen many advertised costs starting at $50 per avg. Johnson County lawn. Don’t automatically assume that a higher advertised cost is just a bad deal. Ask questions about the service offered to be sure your are comparing apples to apples. 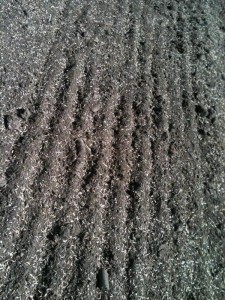 Verticutting uses a machine to cut straight lines into your lawn. The depth of these lines is variable and a by product of the slicing action is known as de-thatching. A verticut machine, like the aerator, has several blades attached to a drum. These blades slice the ground producing a proper seed bed, or corn-row, while removing thatch along the way. A machine like what is shown in the picture above has the ability to perform all three actions at once. Seed, cut and de-thatch.

Verticutting is argued the best way to prepare a lawn for over-seeding. By removing the thatch and cutting the rows, a “clean” evenly distributed seed bed creates an even lawn. Verticutting should be done in two passes. Once to remove the thatch and slice, and again at a 45 degree to spread the seed. For severely damaged lawns, this second pass may be to remove thatch as well, in which case the seed is then placed by a broadcast spreader. This is most common. It should not be ignored that verticutting does also decrease lawn compaction by cutting in the rows. It is, however, not to the extreme as a core aerator is.

Verticut costs have been seen advertised starting at $70 per avg. Johnson County lawn. Again, higher pricing doesn’t mean a rip-off. The machine types, removing and collecting the thatch and two directions are all factors to consider. For what it’s worth, my lawn is verticut perpendicular to the street, thatch collected and removed, then cut in a 45 degree then distributing the seed.

The main thing we hear is of people that want both done. I always reply with, “That’s not a good idea.” Why? As you have read above, if you do both, you have hit your lawn between the two a total of FOUR times. What do you have left? Dust.

Core aeration is great for the lawn as it breaks up compaction and helps control thatch. It is not the best practice for seeding. If your main focus is to overseed then verticut as it provides for the best and most even seed bed. Core aeration can be used but verticutting is preferred. Aeration is best done in the fall but can also be done in the spring.

We at Hometown Lawn, suggest an alternating annual schedule of verticut and overseed one year, then aerate the next. I would never suggest doing both at the same time. If not only for the pet peeve of that a core hole collects your new seed and creates yard “hair plugs”. Agh, it looks horrible.

If your lawn needs both, then we would suggest a verticut and overseed in the fall and aerate in the early spring. This gives new grass time to establish as well as aerating early in the season will still allow for an application of Prevent. In our area, Spring Seed without growing a lot of weeds is nearly impossible and is impossible without an irrigation system.

Fall seeding for our area is best at an overseed application of 5-8 lbs / 1,000 sq ft. Followed by a starter fertilizer immediately after seeding and another fertilizer in four weeks. Follow up with a Winter fertilizer (46-0-0) in November.

If you are ready to go, or still undecided give us a call 913.256.5296 and let us get started or answer a few questions to help you determine what’s right for you and your lawn.

We offer our lawn aerating / verticut / verticutting / overseeding services to all the cities of Olathe, Lenexa, Overland Park, Shawnee, Prairie Village, Fairway, Gardner, Spring Hill, Merriam, Mission, Mission Hills, Leawood and more in Johnson County, Kansas as well as in Kansas City, Mo and Kansas City, Ks. Don’t see your city? Just contact us and we would be happy to discuss it as we service most of Kansas City and the Metro.

This site uses Akismet to reduce spam. Learn how your comment data is processed.